Why We Need to Pass Proposition 55 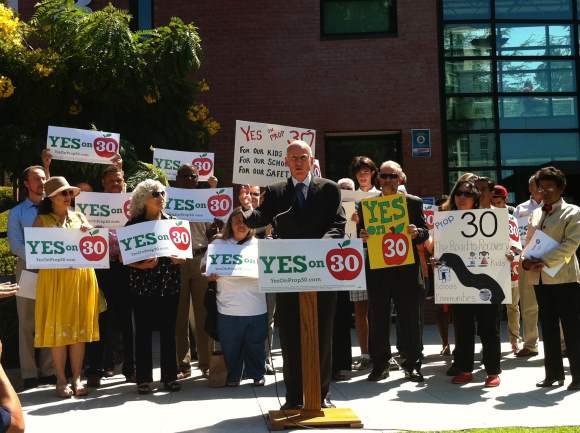 As many of us in education circles remember, before the passage of Proposition 30 in 2012, the funding situation for schools and colleges in California was dire.
The question was not IF there were going to be cuts, but rather, how large they would be and how much damage they would do to our students, our profession, and to the communities we serve.

But fortunately, in the wake of the Great Recession and the Occupy movement, the questions of economic inequality and social justice were in the air and we in the California Federation of Teachers, along with our community allies, were able to muster a successful campaign first for the Millionaire’s Tax and then for the passage of Proposition 30, the compromise measure that was forged with Governor Brown.

Prop. 30 raised income taxes by 1 to 3% on the wealthy (individuals making more than $250,000 a year) and increased sales taxes by 0.25% to fund education in California. When voters approved Prop. 30 in 2012, it helped put California back on the road to budget stability. Because of this essential measure, California began restoring funding for our public schools and reversing cuts to important vital services.

Prop. 30 helped public education recover some of the funds it lost during the recession. We’re only now just beginning to get our schools and community colleges on track. We’ve hired more teachers, brought additional books and supplies directly to the classroom, expanded libraries, and improved our community colleges, while at the same time helping to stabilize California’s budget.

More specifically, Prop. 30 has brought in more than $6 billion a year and helped restore the promise of California’s education system in many ways:

Despite these successes, however, much work remains to be done. As CFT President Joshua Pechthalt recently noted, “While Prop. 30 has been a major success, public education in California is seriously underfunded. We still rank near the bottom of the nation in per-pupil spending, class-size average and per-student ratio in nurses, librarians, and counselors. Now is not the time to give a multi-billion tax break to the wealthy in order to defund schools.”

Unfortunately, Prop. 30 was a temporary measure. The sales tax expires after 2016, and the income tax on the wealthy sunsets after 2018. The loss of this revenue would devastate education across California and here in the San Diego Community College District where I work, for instance, it would mean a 15% reduction in revenue.

It does not take a rocket scientist to figure out the huge negative impacts that this would have on our ability to serve our students and evolve to meet the challenges of the future. So if we do not want to return the bad old days of perpetual budget crisis and cuts, we need to pass Proposition 55.

Proposition 55, also called the “Children’s Education and Health Care Protection Act of 2016,” is the statewide ballot measure to extend Prop. 30. This measure drops the sales tax that was part of Proposition 30 while extending the top earner income tax for twelve years. Prop 55 will also pay for increased state costs for health care for low-income Californians.

While many in progressive circles clearly would have preferred to make Proposition 30’s taxes on the wealthy permanent, Prop. 55 does extend this revenue stream for another generation of students for twelve more years.

And despite claims to the contrary, this tax on the affluent has done no discernable damage to the state economy nor has it hindered job creation. Indeed, after the passage of Proposition 30, the state’s economy improved, 1.4 million new jobs have been created, and the golden state has added 10,000 more millionaires since 30’s passage, giving the lie to the fantasy claim that Prop. 30’s minor tax increases on the wealthy would lead to an exodus of the rich.

More importantly, Proposition 55 will prevent a new round of devastating cuts to education and vital social services. It will bring in $8-11 billion a year and that money will go directly into a special fund that supports K-14 education, and community colleges. It will also increase state funds for seniors, low-income children health care and invest money in California’s Rainy Day budget reserves. This measure will not permit any of the funds to go towards bureaucracy or administrative costs. The funds will be used to help students by reducing class sizes, updating textbooks, hiring new teachers and keeping tuition costs from skyrocketing.

In sum, we need to work hard to pass Proposition 55 because it is the right thing to do for education and social justice in California. The reasons for extending Prop 30 are the same as those to pass it in the first place: to continue to restore funding lost to years of cuts, and re-invest in the resources teachers need to teach and the programs students need to learn. The revenue source for Prop. 30 is taxpayers who have benefited from rising inequality. Prop 30 has been a fair tax to ensure access to education and services for all Californians. If Prop 30 expires we will have to cut billions of dollars from schools in order to give a massive tax break to the rich.

Failing to address the coming revenue crisis in this modest and proactive way will result in a new funding crisis for education in California. That is not the future we want for our children. So let’s work hard and be sure we are part of the movement to fund our state’s future and ensure quality education for all. 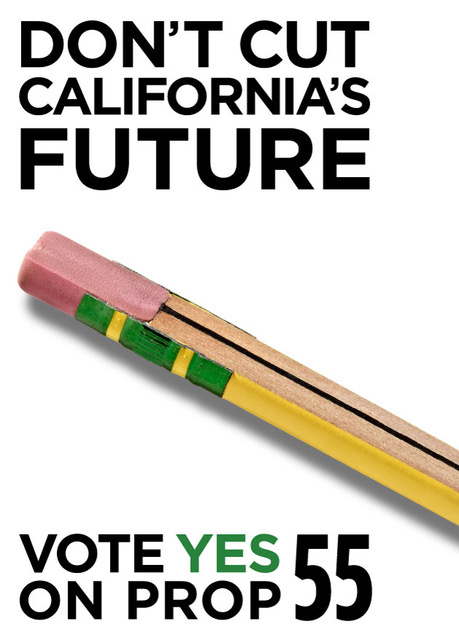