Why May Day Matters Now More than Ever – part 4 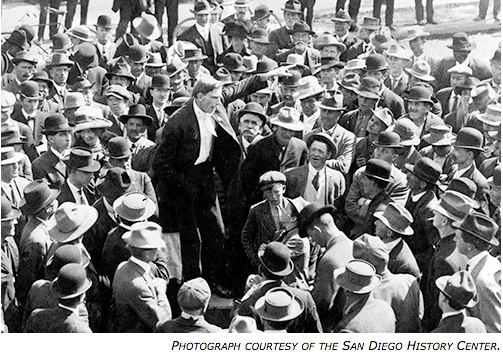 During the winter and spring of 1912, members of the Industrial Workers of the World (IWW) and their allies in labor and the community engaged in a pitched battle against a city ordinance that banned public speaking in the area around 5th and E Streets in downtown San Diego.

During the course of this struggle, many were arrested, beaten, and even killed for asserting their rights to public speech and assembly—for the simple right to stand on a soapbox and speak. The response to what started as an organizing drive for the local IWW turned into a national cause to defend the rights of ordinary working people and citizens of all classes to free speech, with thousands of people flooding into San Diego, defying the ban, and filling the jails in protest.

The enemies of free speech at the time included many in local government, business, and the press, and free speech fighters were the victims of violence at the hands of the local police as well as torture by vigilantes.  Perhaps the best known incident in the free speech fight was when the famous anarchist, Emma Goldman, came to town and was nearly attacked by a mob at Santa Fe Station before being escorted to the US Grant Hotel, where her lover, Ben Reitman, had taken room.  No sooner were they reunited, then he was kidnapped by vigilantes, driven north, tortured, tarred and feathered and sent to Los Angeles.  This was, perhaps, the most glaring example of how flimsy American “rights” were for those who held unpopular political opinions at the time.

While the repression shut down the soap-boxers at 5th and E temporarily, the right to free speech was eventually restored to San Diegans in 1915 when the ban was overturned and legal picketing was established as a basic right.  Today, anyone who enjoys the right to assemble, protest, and speak in public in San Diego has the Free Speech League of the Progressive Era to thank for fighting to maintain basic rights for all San Diegans.  The legacy of this time lived on in every labor and civil rights fight that followed.

We need to celebrate the legacy of local labor and civil rights activism and remember that if we are not vigilant in the protection of our rights, we can certainly lose them.   Click here for more on the San Diego Free Speech fight.

The Trump administration and the current leadership in Congress are gearing up for a full-scale assault on labor and have pledged to “deconstruct” the New Deal.  Union busting laws are making their way through the legislative process as are the repeal of a multitude of basic worker protections.  We cannot let this happen.

Are you participating in our AFT May Day 2017 Events?  Like and RSVP for your campus’s events on our Facebook Page: May Day – AFT Local 1931