This article speaks well to part of the role we feel our union must play in dismantling the systemic racism in our society.

Unions Are Essential for Eliminating Racism

A new study finds that unions don’t just increase wages and benefits for workers on the job — union membership is also linked to diminished racist attitudes among white workers. If we want to defeat racism, building strong, democratic unions is essential. 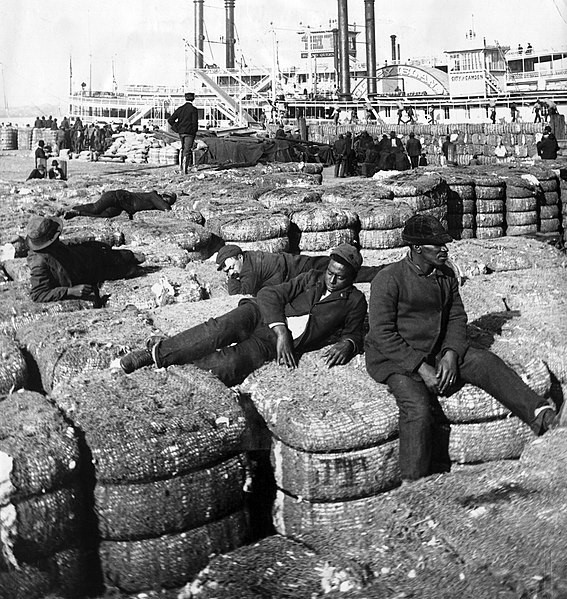 White and black dockworkers resting on cotton bales in the port of New Orleans. (B. L. Singlay)

In New Orleans in the years leading up to the Civil War, European immigrant waterfront workers lent their support to the cause of abolition. The egalitarian idealism of their antislavery commitment was entwined with a pragmatic understanding that the exploitation of unpaid labor undercut their bargaining power and drove down their own wages. Thus they opposed the “peculiar institution,” which seemed to benefit only a wealthy planter class with which they had little in common.

But once slavery was abolished, the celebration proved short-lived, as a new set of problems arose. European immigrant dockworkers in New Orleans were now competing for jobs with an influx of formerly-enslaved people whose labor was rendered cheap by destitution and pervasive anti-black repression. This development triggered racist reaction from white dockworkers, who in some cases began calling for the deportation of ex-slaves to Africa.

When black waterfront workers formed a union in 1872 and sought integration or at least alliance with the existing white unions, “We were scoffed at,” a black worker recalled, “and rebuked by white men who work along shore, telling us constantly that the negroes broke the wages down, and it caused all to suffer.”

This racial division and hostility was advantageous to the New Orleans economic elite. The non-cooperation of groups of waterfront workers resulted in a permanent supply of strikebreakers — if the white workers walked out, black workers could be called in to replace them, and vice versa. The dynamic persisted for decades and undermined one union effort after another. By the 1890s, however, it was becoming obvious to many white waterfront workers that cross-racial solidarity would be practically necessary. Much as they had made the decision to strategically oppose slavery, many began to see the wisdom of integrated worker organization.

The result of this dawning awareness was the Triple Alliance, a consortium of three unions consisting of black and white workers alike, who decided to strike in tandem. Together, they shut down the port of New Orleans. Black and white workers across the city joined in, and the usual kinetic movement of the entire city ground to a screeching halt. The strike won significant gains for workers, proving the practical efficacy of cross-racial cooperation. Thereafter, New Orleans unions mandated that black and white workers be assigned to work crews in equal numbers alongside each other, a policy they called “half-and-half.”

This story is of course abridged — for all the details, see Eric Arnesen’s Waterfront Workers of New Orleans: Race, Class, and Politics, 1863–1923 — but in its abbreviated form it illustrates how unions can function as an effective vehicle for racial solidarity and equality.

Of course, in a profoundly segregated and racially unequal society, unions by themselves are no panacea. The racially integrated unionism that followed the New Orleans General Strike of 1892 hardly entailed the total elimination of racism among white workers. And US labor history is tragically full of examples of white workers using their unions as vehicles for defending white supremacy rather than dismantling it.

But the discovery of the strategic utility of multiracial solidarity, and the existence of organizational forms through which it could be regularly realized, made up of unionists who were dedicated to antiracist unionism, did lead to a greater willingness on the part of white workers to support the interests of African Americans. After all, integrated unions depended for their very survival on interracial solidarity — a subversive dynamic in a Jim Crow system.

The question of what impact unions have on racism is a live one. Racism is still a major issue across our society, workers of all races continue to be exploited, and racial division continues to be an obstacle to effective resistance. A new paper titled “Labor Unions and White Racial Politics,” published in the American Journal of Political Science, provides new data affirming that multiracial unions do indeed positively transform white workers’ attitudes about race.

The study, conducted by Paul Frymer of Princeton University and Jacob M. Grumbach of the University of Washington, evaluated white people’s responses to statements that effectively deny the existence of racism —  for example, “It’s really a matter of some people not trying hard enough; if blacks would only try harder they could be just as well off as whites.” They found that white union members are less likely to have racist attitudes than white workers in similar industries who are not in a union, becoming a union member reduces white workers’ racial resentment, and even that formerly being a union member reduces white workers’ racial resentment. That lessening of racial resentment even translates, they write, to increased support for policies that benefit African Americans like affirmative action.

There are a number of different mechanisms by which unions might decrease racism, and Frymer and Grumbach present cases for several in their paper, ranging from structural incentives for union leadership to promote racial equality to the labor movement’s institutional ties to the comparatively less racist Democratic Party. But I’ll stress one in particular: unions provide opportunities for people of different racial backgrounds and identities to not merely work side by side — which may itself relax prejudice through sheer exposure — but to work toward a common goal together, promoting cooperation, and enhancing respect and mutuality across racial lines. In many workplaces, that goal of building a strong union cannot be achieved without workers joining together.

Organizations of all kinds shape their members’ political views, broadly speaking, but unions are unique among organizations, as Frymer and Grumach note, due to the fact that they represent people based on where they work. Work is compulsory for most people of all racial backgrounds, which means that union membership can and often does (though not as a rule) feature a degree of diversity that’s higher than in other types of community formations. For example, a white Indiana warehouse worker may live in a mostly white neighborhood, and perhaps attend a mostly white church, but his or her employer hires people of all racial backgrounds, and therefore their union is likely to be more racially diverse.

But lots of workplaces are racially diverse. The distinct feature of unions is that workers from disparate backgrounds are encouraged to view their interests as bound together. And in many cases, they have opportunities to make collective decisions about how they want their union to be run, and to work together to secure common victories.

Some unions are more democratic or better at member engagement than others. Indeed this presents a strong argument for building more democratic unions, for it’s in active cooperation that people are most likely to have their inherited prejudices challenged and their worldview transformed.

Unions give people the opportunity to routinely practice multiracial solidarity. Not only that, but they incentivize it: the more cooperative union members are, the greater unity they will have heading into a workplace struggle, and the greater the eventual reward for all. In that sense, diverse democratic unions can be schools of cross-racial cooperation, which are sorely lacking and desperately needed in our racially stratified society.

In Black Reconstruction in America, W. E. B. Du Bois wrote that racism had so perniciously separated black and white workers in the South that “there probably are not today in the world two groups of workers with practically identical interests who hate and fear each other so deeply and so persistently and who are kept so far apart that neither sees anything of common interest.”

The era of Jim Crow is formally over, but racism continues to drive a wedge between people who have more to gain by standing together than apart. Yet while racism remains an impediment to solidarity, it is impossible to appeal to every racist individual one by one. We need to create situations that by their very nature lead people to arrive on their own at a recognition of common interests across racial lines. Big, vibrant, democratic unions are indispensable to that undertaking.

Meagan Day is a staff writer at Jacobin. She is the coauthor of Bigger than Bernie: How We Go from the Sanders Campaign to Democratic Socialism.