This week in Labor History

You may not know that May is Labor History month.  Here’s what happened this week in labor:

Four striking workers are killed, at least 200 wounded, when police attack a demonstration on Chicago’s south side at the McCormick Harvesting Machine plant. The Haymarket Massacre is to take place the following day – 1886  (Attacks against strikers and the very existence of organized labor persist to this day.  From Blackjacks to Briefcases is the first book to document the systematic and extensive use by American corporations of professional unionbusters, an ugly profession that surfaced after the Civil War and has grown bolder and more sophisticated with the passage of time.)

Eugene V. Debs and other leaders of the American Railway Union are jailed for six months for contempt of court in connection with Pullman railroad car strike – 1895

Pete Seeger, folksinger and union activist, born in Patterson, N.Y. Among his songs: “If I Had A Hammer” and “Turn, Turn, Turn” – 1919 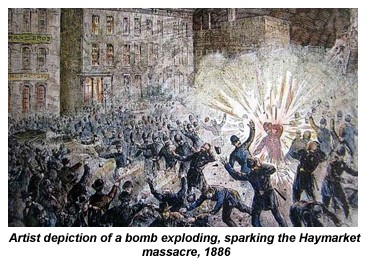 May 04
Haymarket massacre. A bomb is thrown as Chicago police start to break up a rally for strikers at the McCormick Harvesting Machine Co. A riot erupts, 11 police and strikers die, mostly from gunfire, and scores more are injured – 1886

On Chicago’s West Side, police attack Jewish workers as they try to march into the Loop to protest slum conditions – 1886

Some 14,000 building trades workers and laborers, demanding an 8-hour work day, gather at the Milwaukee Iron Co. rolling mill in Bay View, Wisc. When they approach the mill they are fired on by 250 National Guardsmen under orders from the governor to shoot to kill. Seven die, including a 13-year-old boy – 1886

(Unions for Beginners: It is a time when unions have returned to the front pages of newspapers and blogs and demonstrators are in the streets of America every day. It is a time when the right wing has tried to strike the final blow against what remains of the right to collective bargaining. It is a time when millions of members of the middle class are falling through the cracks in a downward economic trend that parallels the decline of unions. It is this time when people are turning again to the history of unions. Unions for Beginners provides an introduction to that essential history.)

Nineteen machinists working for the East Tennessee, Virginia, and Georgia Railroad gather in a locomotive pit to decide what to do about a wage cut. They vote to form a union, which later became the Int’l Association of Machinists – 1888 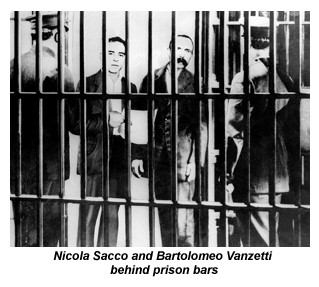 Italian-American anarchists Nicola Sacco and Bartolomeo Vanzetti are arrested in Boston for murder and payroll robbery. Eventually they are executed for a crime most believe they did not commit – 1920

Lumber strike begins in Pacific Northwest, will involve 40,000 workers by the time victory is achieved after 13 weeks: union recognition, a 50¢-per-hour minimum wage and an 8-hour day – 1937

The U.S. unemployment rate drops to a 30-year low of 3.9 percent; the rate for Blacks and Hispanics is the lowest ever since the government started tracking such data – 2000