June 11
Representatives from the AFL, Knights of Labor, populists, railroad brotherhoods and other trade unions hold a unity conference in St. Louis but fail to overcome their differences – 1894

John L. Lewis dies. A legendary figure, he was president of the United Mine Workers from 1920 to 1960 and a driving force behind the formation of the Congress of Industrial Organizations – 1969

June 12
Fifty thousand members of the Amalgamated Meat Cutters and Butcher Workmen employed in meatpacking plants walk off their jobs; demands include equalization of wages and conditions throughout U.S. plants – 1904

The U.S. Supreme Court invalidates two sections of a Florida law: one required state licensing of paid union business agents, the other required registration with the state of all unions and their officers – 1945

Major League Baseball strike begins, forces cancellation of 713 games. Most observers blamed team owners for the strike: they were trying to recover from a court decision favoring the players on free agency – 1981 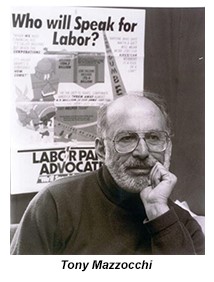 Tony Mazzocchi born in Brooklyn, N.Y. An activist and officer in the Oil, Chemical and Atomic Workers union, he was a mentor to Karen Silkwood, a founder of the Labor Party, and a prime mover behind the 1970 passage of the Occupational Safety and Health Act – 1926

The first commercial computer, UNIVAC I, is installed at the U.S. Census Bureau – 1951 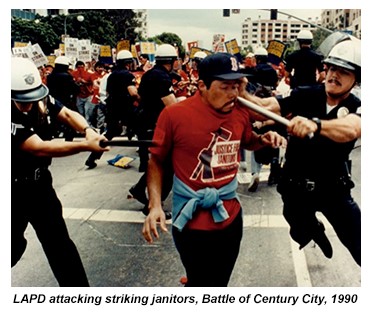 Battle of Century City, as police in Los Angeles attack some 500 janitors and their supporters during a peaceful Service Employees Int’l Union demonstration against cleaning contractor ISS. The event generated public outrage that resulted in recognition of the workers’ union and spurred the creation of an annual June 15 Justice for Janitors Day – 1990 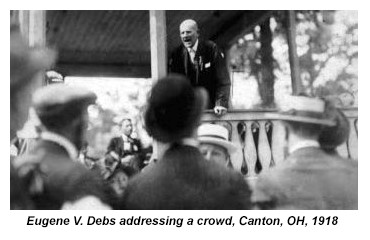 Railroad union leader and socialist Eugene V. Debs speaks in Canton, Ohio, on the relation between capitalism and war. Ten days later he is arrested under the Espionage Act, eventually sentenced to 10 years in jail – 1918

The National Industrial Recovery Act became law, but was later to be declared unconstitutional. It established the right to unionize, set maximum hours and minimum wages for every major industry, abolished sweatshops and child labor. The Wagner Act, in effect today, was approved two years later to legalize unionization – 1933

Inacom Corp., once the world’s largest computer dealer, sends most of its 5,100 employees an email instructing them to call a toll-free phone number; when they call, a recorded message announces they have been fired – 2000

June 17
Twenty-one young women and girls making cartridges for the Union Army at the Washington, D.C. arsenal during the Civil War are killed in an accidental explosion. Most of the victims were Irish immigrants. A monument was erected in the Congressional Cemetery, where 17 of the workers were buried – 1864 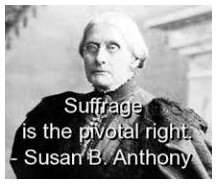 Susan B. Anthony goes on trial in Canandaigua, N.Y., for casting her ballot in a federal election the previous November, in violation of existing statutes barring women from the vote – 1873

Mary Harris “Mother” Jones leads a rally in Philadelphia to focus public attention on children mutilated in the state’s textile mills. Three weeks later the 73-year-old will lead a march to New York City to plead with President Theodore Roosevelt to help improve conditions for the children – 1903

Twelve trade unionists meet in Pittsburgh to launch a drive to organize all steelworkers. It was the birth of the United Steelworkers of America (then called the Steel Workers Organizing Committee). By the end of the year 125,000 workers joined the union in support of its $5-a-day wage demand – 1936

Nine firefighters are killed, eight more injured when a large section of Boston’s Hotel Vendom collapses on them.  The firefighters were performing cleanup when the collapse occurred, having successfully fought a fire at the luxury hotel earlier in the day – 1972 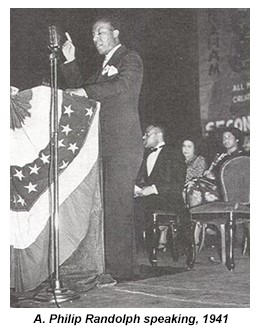 Union and civil rights leader A. Philip Randolph and others meet with President Roosevelt about a proposed July 1 March on Washington to protest discrimination in war industries. A week later, Roosevelt orders that the industries desegregate – 1941