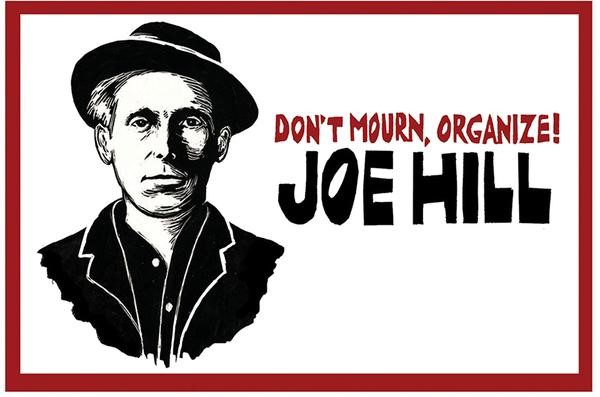 Joe Hill, labor leader and songwriter, executed in Utah on what many believe was a framed charge of murder. Before he died he declared: “Don’t waste any time mourning. Organize.” – 1915

The National Writers Union is founded, representing freelance and contract writers and others in the trade. In 1992 it was to merge into and become a local of the United Auto Workers – 1981 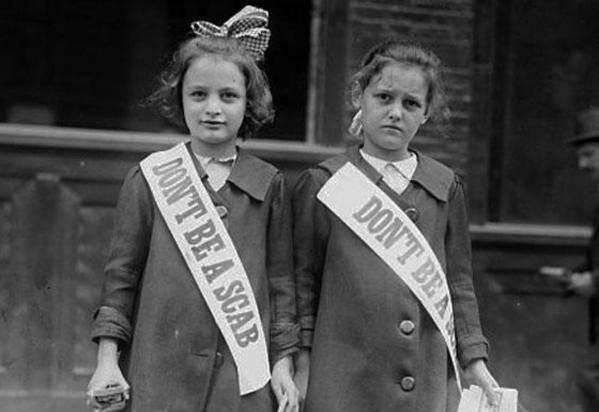 First use of the term “scab,” by Albany Typographical Society – 1816

The time clock is invented by Willard Bundy, a jeweler in Auburn, N.Y. Bundy’s brother Harlow starts mass producing them a year later – 1888

A total of 78 miners are killed in an explosion at the Consolidated Coal Company’s No. 9 mine in Farmington, W. Va. – 1968

The Great Recession hits high gear when the stock market falls to its lowest level since 1997. Adding to the mess: a burst housing bubble and total incompetence and greed—some of it criminal—on the part of the nation’s largest banks and Wall Street investment firms. Officially, the recession lasted from December 2007 to June 2009, but unemployment still hovers around the 7 percent mark today – 2008

Six miners striking for better working conditions under the IWW banner are killed and many wounded in the Columbine Massacre at Lafayette, Colo. Out of this struggle Colorado coal miners gained lasting union contracts – 1927 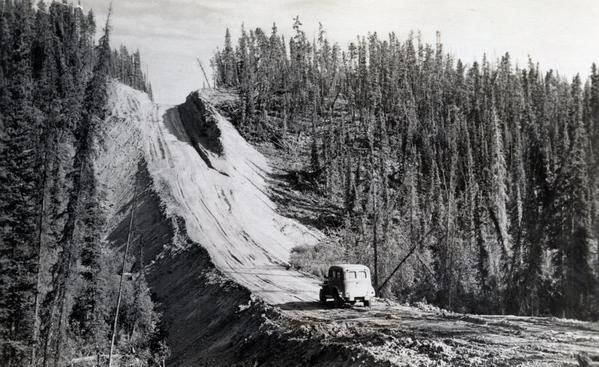 The 1,700-mile Alaska Highway (Alcan Highway) is completed, built during World War II on the order of President Roosevelt. Some 11,000 troops, about one-third of them African-Americans, worked on the project, which claimed the lives of an estimated 30 men. Memorials for the veterans are scattered in spots throughout the highway, including the Black Veterans Memorial Bridge, dedicated in 1993. It wasn’t until 1948 that the military was desegregated – 1942

The United Auto Workers Union strikes 92 General Motors plants in 50 cities to back up worker demands for a 30-percent raise. An estimated 200,000 workers are out – 1945

Staten Island and Brooklyn are linked by the new Verrazano Narrows Bridge, the longest suspension bridge in the world at the time and still the longest in the U.S. Joseph Farrell, an apprentice Ironworker on the project, told radio station WNYC: “The way the wind blows over this water it would blow you right off the iron. That was to me and still is the most treacherous part of this business. When the wind grabs you on the open iron, it can be very dangerous.” Three workers died over the course of the 5-year project – 1964

The promise of telecommuting arrives when the Advanced Research Projects Agency Network—ARPANET, the beginnings of the global internet—is established when a permanent link is created between the University of California at Los Angeles and the Stanford Research Institute in Menlo Park, Calif. – 1969 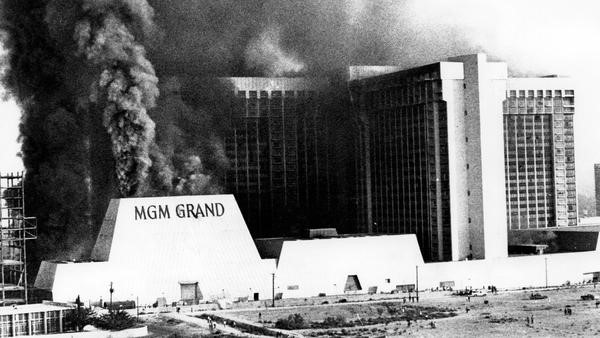 A fire at the MGM Grand Hotel and Casino in Las Vegas kills 85 hotel employees and guests and sends 650 injured persons, including 14 firefighters, to the hospital. Most of the deaths and injuries were caused by smoke inhalation – 1980

Flight attendants celebrate the signing into law a smoking ban on all U.S. domestic flights – 1989 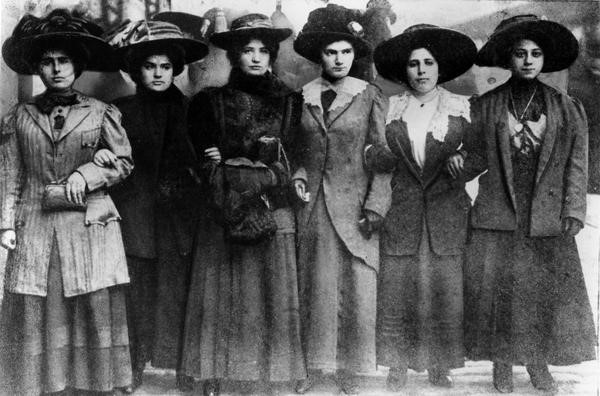 “The Uprising of the 20,000.” Some 20,000 female garment workers are on strike in New York; Judge tells arrested pickets: “You are on strike against God.” The walkout, believed to be the first major successful strike by female workers in American history, ended the following February with union contracts bringing better pay and working conditions – 1909

The district president of the American Federation of Labor and two other White men are shot and killed in Bogalusa, La., as they attempt to assist an African-American organizer working to unionize African-American workers at the Great Southern Lumber Co. – 1919

President John F. Kennedy is assassinated. Generally considered a friend of labor, Kennedy a year earlier had issued Executive Order 10988, which authorized unionization and a limited form of collective bargaining rights for most federal workers (excluding the Department of Defense). Many states followed the example set by Kennedy – 1963 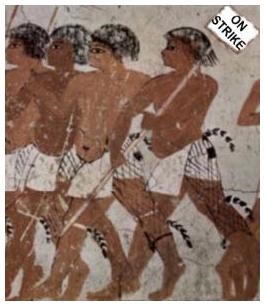 History’s first recorded (on papyrus) strike, by Egyptians working on public works projects for King Ramses III in the Valley of the Kings. They were protesting having gone 20 days without pay—portions of grain—and put down their tools. Exact date estimated, described as within “the sixth month of the 29th year” of Ramses’ reign—1170BC—in The Spirit of Ancient Egypt, by Ana Ruiz. Scholar John Romer adds in Ancient Lives: The Story of the Pharaoh’s Tombmakers that the strike so terrified the authorities they gave in and raised wages. Romer believes it happened a few years later, on Nov. 14, 1152 B.C.

Mine Workers President John L. Lewis walks away from the American Federation of Labor to lead the newly-formed Committee for Industrial Organization. The CIO and the unions created under its banner organized six million industrial workers over the following decade – 1935

The first meeting between members of the newly-formed National Football League Players Association and team owners takes place in New York. Union founders included Frank Gifford, Norm Van Brocklin, Don Shula and Kyle Rote. They were asking for a minimum $5,000 salary, a requirement that their teams pay for their equipment, and a provision for the continued payment of salary to injured players. The players’ initial demands were ignored – 1956 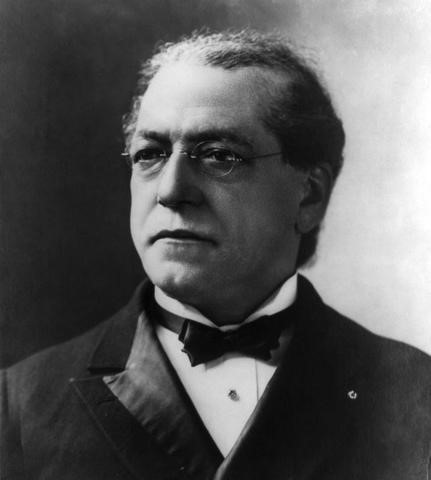 Led by Samuel Gompers, who would later found the American Federation of Labor, Cigarmakers’ Int’l Union Local 144 is chartered in New York City – 1875

Some 10,000 New Orleans workers, Black and White, participate in a solidarity parade of unions comprising the Central Trades and Labor Assembly. The parade was so successful it was repeated the following two years – 1883

Teachers strike in St. Paul, Minn., the first organized walkout by teachers in the country. The month-long “strike for better schools” involving some 1,100 teachers—and principals—led to a number of reforms in the way schools were administered and operated – 1946 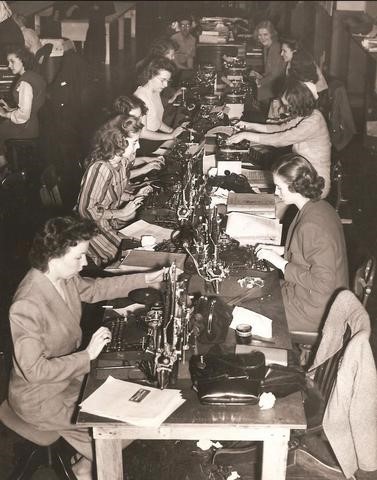 Nearly 1,550 typesetters begin what is to become a victorious 22-month strike against Chicago newspapers – 1947

Canadian postal workers, protesting a Post Office decision to offer discounts to businesses but not individuals, announce that for one week they will unilaterally reduce postage costs by about two-thirds. Declared the Canadian Union of Postal Workers: “(M)embers of the general public, not businesses, can mail letters with 10 cents postage and postal workers will process them without taxing them for insufficient postage” – 1983