Just Say NO WAY to Measure A

It’s All About the Climate and Our Children’s Future 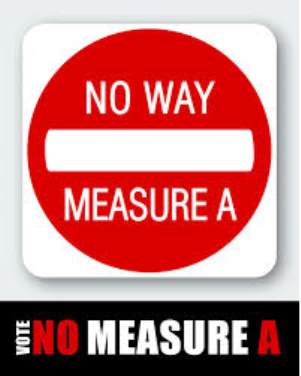 San Diego does not have a history of visionary regional planning, but the woefully inadequate Measure A would take our city to a new low by ensuring decades more of inadequate efforts to address both our infrastructure needs and climate change.

Sadly, Measure A is not up to the transportation and climate justice challenges of the present and would guarantee a future for our city that would leave us with no solutions for climate change or traffic congestion while increasing pollution, poisoning our children, and turning a deaf ear to the needs of beleaguered communities of color.

Measure A is a disingenuous effort to slip a blank check to an unaccountable agency more interested in putting a green façade on business as usual than stepping up to the plate and really attempting to meet the needs of the 21st century. This decades-long regressive sales tax is a bad investment for our children’s future. We can, indeed we must, do better.

That is why San Diegans should say No Way to Measure A.

The Quality of Life Coalition, a group of labor, environmental, social justice, and transit organizations representing over 150,000 San Diego County residents, pressed the San Diego Association of Governments (SANDAG) for many months to come up with a better ballot measure that contains a project labor agreement, more robustly funds transit, and adequately addresses climate change. In response, SANDAG gave the coalition a deaf ear, preferring instead to invest lots of money in polling and a massive public relations campaign designed to sell the measure rather than work with the community to craft a better product.

The argument in favor of Measure A claims its deeply compromised plan is the best we can do. This is a perfect illustration of what Naomi Klein identifies as the central issue facing anyone interested in promoting meaningful climate action in that the “structural problem” we face is that people can “simultaneously understand the medium to long-term risks of climate change” and still believe it is in their “short-term economic [or political] interest” to continue business as usual.

This is precisely the situation concerned San Diegans face in dealing with SANDAG’s blindness when it comes to taking the actions needed to address the pressing threat of climate change at the local level.

So the problem is not so much that the folks in the twenty-some labor, community, and environmental groups that comprise the Quality of Life Coalition are demanding “environmental purity” or “perfection,” as some critics have claimed, it is that the advocates of Measure A are satisfied to pursue business as usual and act as if they are still committed to protecting the environment. By insisting that the current political hegemony in San Diego is unchangeable they are suffering from a profound failure of the imagination.

This is particularly frustrating when one only needs to look north to Los Angeles, of all places, to see a far better approach being taken to shape the region’s future with regard to transit, creating good middle-class jobs for local residents, and reducing greenhouse gasses.

In the face of looming catastrophic climate change, this kind of tired incrementalism doesn’t cut it. Something isn’t better than nothing if that something keeps us on a steady course down the suicide path. Perhaps it’s a convenient way to keep our collective cognitive dissonance at bay and feel better; but it is a deeply irresponsible, morally bankrupt approach to decisions that will help seal or save the fate of our children.

So just say NO Way to Measure A.

David Harris from SD 350 and the Chair of the Sierra Club SD, Ruben Arizmendhi: http://sandiegofreepress.org/2016/10/why-measure-a-is-bad-on-climate-and-bad-for-the-region/