Inequality for All in America’s Higher Education System

By Jim Miller with Ian Duckles

Last week I had the pleasure of seeing Thomas Piketty speak on economic inequality at UCSD. In his talk, Piketty hit on the central themes of his seminal work, Capital in the Twenty-First Century: how our current level of economic inequality is now back to where it was before the “great compression” of the mid-twentieth century when union density, progressive taxation, and educational policies helped produce the high point of the American middle class. He underlined how there is no economic benefit to our current level of excessive inequality and that it is the product not of any “natural” function of the free market economy, but rather several decades of wrong-headed ideology, destructive politics, and bad policy.

During the question and answer session following his presentation, a well-heeled older gentleman prefaced his question about why the “lower 50 percent” don’t just vote out the bad policies with, “this audience, we’re all the top 10%,” which drew a few laughs from people, many of whom were likely debt-ridden students, teaching assistants, campus workers, and lecturers whose income doesn’t come close to landing them in that realm. That there may have been a ragtag group of professors and students from lowly City College in attendance was not even in the speaker’s imagination.

I couldn’t help but think how UCSD is a perfect microcosm of the macroeconomic inequality that Piketty was talking about and that the class-blind commenter was a perfect manifestation of the very elite ideology that serves to enforce our deep level of inequality. But of course, it’s not just at UCSD where this is an issue but across the entire landscape of American higher education, where what used to be one of the most solid middle-class professions in the country is in the process of being hollowed out, bit by bit.

Coincidentally, October 26th through the 29th happens to be Campus Equity Week, a twice-a-year action designed to bring attention to this very problem. Thus, I will leave the rest of my column to Dr. Ian Duckles, my adjunct colleague in the San Diego Community College District, to further illuminate this issue. 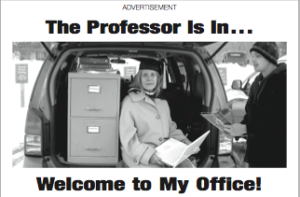 Monday is the first day of Campus Equity Week 2015, a biannual event first held around the turn of the millennium to draw attention to and raise awareness about issues confronting what are variously known as “adjuncts,” “contingent faculty” or “part-timers.”

Defined in the California Educational Code as “part-time, temporary faculty,” adjuncts were originally intended to be just that: supplements to the full-time faculty to teach classes that wouldn’t support a full-time hire, or to help fill out a schedule and cover for sabbaticals and leaves. If, for example, a college wanted to offer courses in real estate, they wouldn’t necessarily hire a realtor full-time (who probably wouldn’t want to take the pay cut to become a full-time instructor), but instead invite a realtor to teach a class or two per semester.

In this way, the college could take advantage of the professional expertise of these individuals without forcing them to quit their day jobs, the very thing that qualifies them to teach in the first place. There is clearly a role for this kind of instructor in the community colleges and schools wouldn’t be able to offer such a diverse list of courses and certificates without the assistance of these kinds of professional, part-time instructors.

Unfortunately, the role of these “part-time, temporary faculty” has shifted considerably over the last 40-50 years. During the late 60’s to early 70’s the ratio of adjuncts to full-timers was about 20% to 80%. Today, the numbers have almost completely reversed with adjuncts making up about 75% of the faculty and full-timers making up about 25%. This shift in the make-up of higher education faculty is mirrored in all areas of higher education (community colleges, Cal States, UC’s and even many private colleges), and has some significant, negative impacts. In what follows, I want to explore these negative impacts on the adjuncts themselves, students, and full-timers.

Beginning with the adjuncts, this emphasis on hiring part-time faculty has significant, negative consequences for those teaching professionals. These consequences are numerous and wide-ranging, but I will highlight just a few. In addition, because there are so many adjuncts, and these adjuncts live such a diversity of lives, it is difficult to speak for everyone. Instead, I will focus on my personal situation as a window into the broader issues confronting part-time college instructors.

Perhaps the most significant impact is that even though I have a Ph.D. and over 10 years of teaching experience, I make significantly less than my full-time counterparts for the same work.

By contrast, I currently teach between 15 and 18 classes a year and make just under $60,000. If we pro-rate these numbers for a per class rate, full-time me would make about $5000 a class while real me makes about $3750 per class (If you are having trouble getting the numbers to add up, the full-time salary also includes other responsibilities that adjuncts are not expected to perform, these have been eliminated from the calculation to give a more realistic per class compensation rate). There are other significant issues such as a lack of compensation for office hours (where instructors meet with students one-on-one outside of class time—something which is required of full-timers), weak or non-existent job security, enormous time spent commuting, etc., but this disparity in pay is the most dramatic, and the most obvious example of the way in which adjuncts are exploited.

However, it should be noted that I am relatively lucky compared to many of my fellow part-timers, who may not get an adequate number of classes, might even lose several at the last minute, and/or not work in a district with a decent union and a degree of job security. Indeed, there are many part-timers whose quick changes in fortune have resulted in the loss of their homes or healthcare, sometimes at the most inopportune times.

So, like too many Americans at present, the majority of college professors, who have what was once considered one of the safest of middle-class jobs, are now part of a growing sector of workers in a fundamentally precarious economic situation. When one factors in the amount of student loan debt many of us carry as a result of our graduate degrees, even adjuncts with a steady flow of classes are often only a step ahead of the debt collector.

Thus, in many ways, the systematic erosion of the job security and economic standing of the majority of college professors mirrors the larger erosion of the American middle class. Far from the stereotype of the “comfortable academic,” many professors today are always just a bad semester away from losing it all.

This reliance on adjuncts also has significant negative impacts on students and all the success metrics such as “retention,” “persistence,” and “transfer rates” that administrators claim to value. Many adjuncts must work multiple jobs at multiple schools in order to make ends meet.

I personally teach eight courses at four schools (Cuyamaca, Mesa, Miramar, and the University of San Diego). This means that I spend a great deal of time on San Diego freeways. Because of the tight scheduling of my courses, I do not have time to spend with students outside of class. Since my compensation rate for office hours is low to non-existent, I don’t hold them. This negatively impacts my students since I am not available to provide them extra assistance or time should they need it. I try to do my best by my students, but with better pay and paid office hours, I know I would be more able to fully serve their needs.

So our higher education system’s institutional reliance on part-time labor undercuts all the rhetoric about the need to serve students and invest in the future. By being “economically efficient” with their labor pool, colleges and universities are short-changing their students, whose costs are ever-increasing as the economic fate of most of their instructors becomes more and more precarious.

Finally, the rise of adjuncts and the “adjunctification” of higher education also pose serious threats to full-time faculty. Many people may not realize how much work goes on behind the scenes to run a college or university. In addition to the actual teaching of courses, there is an enormous amount of essential administrative and committee work that must also be completed.

These include things like making sure that the college has the curriculum and is offering courses and programs that meet student needs, and ensuring that the college can maintain its accreditation. This is important work that is necessary for the college to function, and it is work that must be done by full-time professors. As the ranks of adjuncts swell the administrative demands on full-timers increase in order to do all this work. Adjuncts don’t receive compensation for this work, and thus have little incentive to become involved, putting all of the burden on the dwindling pool of full-timers who are more and more stretched in multiple directions by an increasing number of administrative mandates with little to no additional time to fulfill them in a way that ensures the quality of their work.

In addition, the overreliance on adjuncts actually weakens academic freedom for all faculty as a largely contingent labor force dependent on their next class to pay the rent is less likely to do anything to rock the boat, no less take a principled stand on a controversial pedagogical, political, or administrative issue. While those outside the world of education have frequently maligned “academic freedom,” a democratic society loses this space of free discourse not dependent on coercive economic forces or popular opinion at its peril.

So, I have painted a fairly dire picture here, but what can we do? In addition to raising awareness about these issues, we are also engaged in a lobbying campaign to encourage the Governor and the legislature to earmark more money for adjunct issues.

Specifically, we are asking them to increase funding for adjunct equity pay in the amount of $50 million, support adjunct office hours to the tune of $30 million, and devote $100 million to convert part-time positions to full-time. I would respectfully urge anyone reading this to please contact Governor Jerry Brown and ask him to devote some of the California budget to supporting these important programs that will benefit adjuncts, students, and the community at large that deserves a quality public education system.

Ian Duckles is an Adjunct Professor of Philosophy and Religious Studies at Cuyamaca, Mesa, Miramar, and the University of San Diego.