In Celebration of American Labor

For many today, Labor Day is a day off: a day to go to the beach or have a barbecue, for example. Relaxing activities are certainly part of the tradition. But it should not be forgotten that Labor Day was born out of struggle for better treatment and recognition of the workers who built the wealth of this country. The fight was for many things we take for granted today, such as a minimum wage, a five day work week, the right to form and belong to unions, and the rights of working children. From a folklorist’s point of view, this ongoing movement spawned songs, stories, and legends, as struggle often gives rise to creativity that is used to spread the messages of those involved. 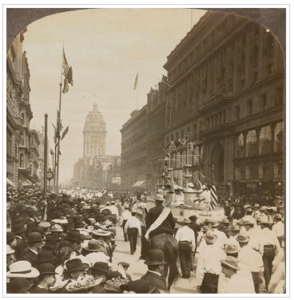 The first Labor Day Parade was on Tuesday, September 5, 1882 in New York City. It was organized by Matthew Maguire of Paterson, New Jersey, (1855-1917), who rode in a car at the head of the parade. According to many historians today, he should be known as the true originator of Labor Day.[1] He is less well-known than another “father” of Labor Day, Peter McGuire, who also advocated for a National day in 1882. Peter McGuire was a more politic choice as the public face of the movement at the time, as Matthew Maguire’s politics were influenced by the socialist movement. But the movement had many followers and advocates. Several states established their Labor Day before the National day was created.

The law creating the national Labor Day was signed by Grover Cleveland, who was not an enthusiastic advocate of labor, in 1896. The disastrous Pullman Strike of 1887, in which most of the US railways were shut down in solidarity with the striking employees of the Pullman company and the Federal government’s hard-line response, created a situation where Cleveland needed to mend fences with organized labor. And so Labor Day was born, and set on the first Monday of September. 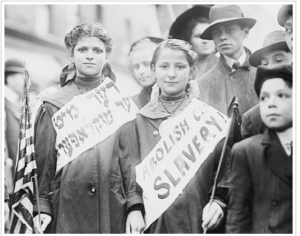 “Labor Day Parade, children in Child Labor demonstration, New York,” 1906. There were a number of labor causes attached to the creation of Labor Day. One of these was unregulated child labor. The emerging tradition of Labor Day parades created opportunities for consciousness-raising and protest.

The Pullman strike should have been the clarion call that regulation of the treatment of workers was needed. The Pullman corporation did not allow unions, and required its workers to live in a company town with no democracy. The running of the town of Pullman was, in fact, declared “un-American” by the Illinois Supreme Court in 1898, and they required the company to divest interest in it. But the labor movement struggled onward for many decades before the most basic workers’ rights we see as standard today began to be firmly established at a National level.
Labor activists used songs to spread their message and explain the plight of workers suffering from low wages and poor working conditions, as well as the activists who tried to change things. Among the earliest documented songs is sheet music for Eight Hour Strike, by Billy Pastor, advocating for the eight hour work day, published in 1872, but probably, like most protest songs, sung before it was published. 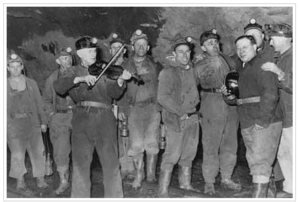 Folklorist George Korson is on the right with his hard had in his hand in the Newkirk Tunnel Mine, Pennsylvania, 1946, as James Muldowney plays his fiddle. Black Star photo, George Korson Collection.

Efforts to unionize coal miners were among the most hard-fought and sometimes violent conflicts of the labor movement. Aunt Molly Jackson (1880-1960) was a singer and activist who composed songs for that movement. “Coal Creek Disaster,” was composed in memory of those who died at the Fraterville, Tennessee coal mine explosion in 1902, calling attention to unsafe mines. “The Death of Harry Simms,” which she composed with her brother, Jim Garland, in about 1932, tells of the killing of a young union activist that she knew. Her “CIO Union Song,” was for recruiting union members. These three examples of her work were collected by Alan Lomax in New York City in 1939.[4]

Folklorist George Korson documented the songs of coal miners, recording “Sprinkle Coal Dust on My Grave” in 1940, a song that includes a tribute to the legendary “Mother Jones” (Mary Harris Jones, 1837-1930) and refers to the time she was placed under house arrest in Pratt, West Virginia while advocating for the movement in 1913. But the labor movement was making major strides at that time, and was celebrated in the song “This is What the Union Done,” composed and sung by African American labor activist and miner George Jones, who composed this song about the triumphs of the Roosevelt era and was also recorded by Korson. 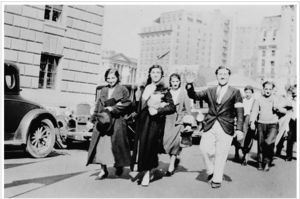 “Eighteen-year-old Marianna Costa (second from left) and other textile workers march, in Washington, D.C., in support of the adoption of federal standards for the silk industry.” Part of Working in Paterson: Occupational Heritage in an Urban Setting, Library of Congress.

In the American Folklife Center’s project to document the occupational life and lore of selected businesses in Paterson, New Jersey, some who remembered their experiences and those of their parents were interviewed. Marianna Costa (1915-2004), a retired worker in the textile industry who became a union official, talks about her parents’ working lives in the 1910s and 1920s. She recalls the long hours, and the consequences for children in these excerpts of an interview with David Taylor in 1994: “My mother left for work at 6:30 and she didn’t come back until six at night” and “So if you worked ten hours a day and six days a week it only left you Sunday.” She explains that she went to work in a dye house at 18 in 1932 and that her first experience with union activism came the next year, with a large textile strike in 1933, as other women in the office told her, “Come on out. Join us. We’re going to strike.” She recalls that she had to ask what a union was, but shortly after, she was elected to a union position, which was unusual for a woman at the time. [2]

This wake-up call leading to union activism is a common thread in the personal stories of those in the movement. David Taylor also interviewed Sol Stetin (1910-2005), who was president of the Textile Workers Union of America,[3] learned about the labor movement when he was a young man working in the shipping room of a dye house. When the workers went on strike, his supervisor told him that he should keep working, the strike didn’t have anything to do with him. But he was soon convinced otherwise, as he explains, and he went and told his striking co-workers, “My Place is with You Guys.” 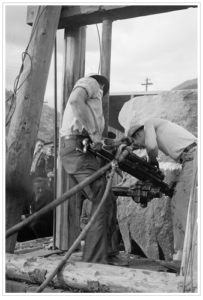 For migrant workers, the issues of fair wages and working conditions is a struggle that continues to the present day. The documentation of the California FSA camps in the The Charles L. Todd and Robert Sonkin Migrant Worker Collection include some union songs sung by the Rains family, such as “Roll Out the Pickets,” sung in 1940 by Ruby Rains. At the end of the recording, Rains discusses the creation of the song at the Arvin FSA camp during the cotton strike of 1939. Lloyd Stalcup, at age 14, wrote a song that he probably did not think of as a labor activist song, and yet brings attention to the circumstances of child labor and particularly child migrants during in the dust bowl era. Small children were educated in the camps. But those old enough to pick crops usually worked. This is Stalcup’s “Cotton Picker’s Song,” recorded in 1940. In this collection you can also hear Augustus Martinez talking with Todd and Sonkin in 1941 about “camp closing, discrimination, labor issues, efforts to organize youth, citizenship,” especially for Mexican and Mexican American workers. In a discussion about picking lemons he also talks about wages and working conditions.

This history, told in the voices of the people who lived it, helps us to understand what people wanted to celebrate through the observance of Labor Day. In addition to parades, Labor Day traditions often include outdoor barbecues and picnics, community gatherings, and games and contests. In the Prints and Photographs database there are photographs by Russell Lee of many activities on Labor Day, September 1, 1940 in the towns of Ridgway and Silverton Colorado, providing an unusually in-depth documentation of Labor Day in two small towns. 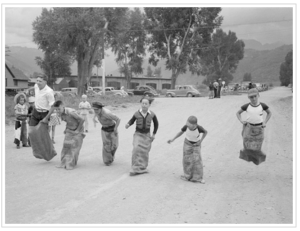 Amid photos of sack races and potato races for children, there are also photos of contests related to work and the history of labor in the region, such as a miner’s stone power drilling contest in Silverton, and a burro loading contest, also in Silverton, that celebrated the region’s gold mining. Worker contests like these often filled a number of functions: they showed the community, particularly children, the kinds of work that people did; they built solidarity among the workers; and they gave people pride in the work that contributed to the life and economy of their towns. Another important highlight of the day was a free community barbecue, with meat roasted in pits in traditional fashion.

Labor Day is not a day with specific traditions that all or most people follow. There is quite a range of activities, but some of them are recognizable as family or community traditions for the day. So perhaps you have a barbecue, or go to the beach. Perhaps your community gets together for a picnic and games. Perhaps you go to a parade. All these are activities that have been part of Labor Day celebrations for a long time. But you may have newer customs for this holiday or a tradition not mentioned here. I would enjoy learning about them in the comments of this blog. If you or friends are taking photographs, remember the AFC 2016 My Tradition project, and consider sending us photos of your old or brand new tradition for this holiday!

“Songs of Unionization, Labor Strikes, and Child Labor,” The Library of Congress Celebrates the Songs of America.

“,” The Library of Congress Celebrates the Songs of America.

Working in Paterson: Occupational Heritage in an Urban Setting, Library of Congress.