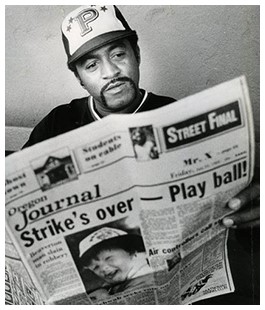 Members of the National Football League Players Association begin what is to be a 2-day strike, their first. The issues: pay, pensions, the right to arbitration and the right to have agents – 1970

The Great Shipyard Strike of 1999 ends after Steelworkers at Newport News Shipbuilding ratify a breakthrough agreement which nearly doubles pensions, increases security, ends inequality, and provides the highest wage increases in company and industry history to nearly 10,000 workers at the yard. The strike lasted 15 weeks – 1999
August 01 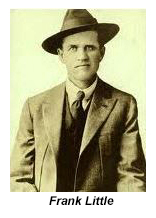 After organizing a strike of metal miners against the Anaconda Company, Wobbly organizer Frank Little is dragged by six masked men from his Butte, Mont., hotel room and hung from the Milwaukee Railroad trestle. Years later writer Dashiell Hammett would recall his early days as a Pinkerton detective agency operative and recount how a mine company representative offered him $5,000 to kill Little. Hammett says he quit the business that night – 1917

Sid Hatfield, police chief of Matewan, W. Va., a longtime supporter of the United Mine Workers union, is murdered by company goons. This soon led to the Battle of Blair Mountain, a labor uprising also referred to as the Red Neck War – 1921 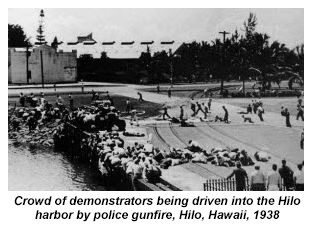 A 17-day, company-instigated wildcat strike in Philadelphia tries to bar eight African-American trolley operators from working. Transport Workers Union members stay on the job in support of the men – 1944

Ten-month strike against Wheeling-Pittsburgh Steel wins agreement guaranteeing defined-benefit pensions for 4,500 Steelworkers – 1997
(In this expanded edition of Strike! you can read about labor-management conflicts that have occurred over the past 140 years. Here you’ll learn much about workers’ struggle to win a degree of justice, from the workers’ point of view. The author also examines the ever-shifting roles and configurations of unions, from the Knights of Labor of the 1800s to the AFL-CIO of the 1990s. A new chapter, “Beyond One-Sided Class War,” looks at how modern protest movements, such as the Battle of Seattle and Occupy Wall Street, were ignited and considers the similarities between these challenges to authority and those of labor’s past.)

The first General Strike in Canadian history is held in Vancouver, organized as a 1-day political protest against the killing of draft evader and labor activist Albert “Ginger” Goodwin, who had called for a general strike in the event that any worker was drafted against his will – 1918

Uriah Smith Stephens born in Cape May, N.J.  A tailor by trade, in 1869 he led nine Philadelphia garment workers to found the Knights of Labor – 1821

Fighting breaks out when sheriff’s deputies attempt to arrest Wobbly leader Richie “Blackie” Ford as he addressed striking field workers at the Durst Ranch in Wheatland, Calif.  Four persons died, including the local district attorney, a deputy and two workers.  Despite the lack of evidence against them, Ford and another strike leader were found guilty of murder by a 12-member jury that included eight farmers – 1913

Florence Reece dies in Knoxville, Tenn., at 86. She was a Mine Workers union activist and author of Which Side Are You On?, written after her home was ransacked by Harlan County sheriff J.H. Blair and his thugs during a 1931 strike – 1986

Some 15,000 air traffic controllers strike. President Reagan threatens to fire any who do not return to work within 48 hours, saying they “have forfeited their jobs” if they do not. Most stay out, and are fired August 5 – 1981 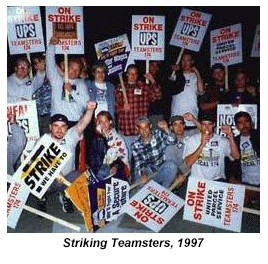 The Amalgamated Association of Iron and Steel Workers is formed. It partnered with the Steel Workers Organizing Committee, CIO in 1935; both organizations disbanded in 1942 to form the new United Steelworkers – 1876

Nearly 185,000 Teamsters begin what is to become a successful 15-day strike at United Parcel Service over excessive use of part-timers – 1997 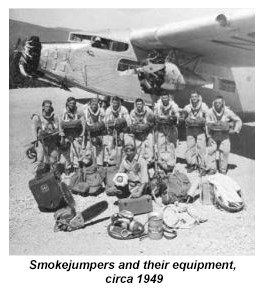 Thirteen firefighters, including 12 smokejumpers who parachuted in to help their coworkers, die while battling a forest fire at Gates of the Mountain, Montana – 1949

The Family and Medical Leave Act (FMLA) took effect today. The first law signed by President Clinton, it allows many workers time off each year due to serious health conditions or to care for a family member – 1993

(The FMLA Handbook, 5th edition, is a thorough, highly readable handbook that will help every worker get the most out of the surprisingly comprehensive Family and Medical Leave Act. It explains how unions can protect workers who are absent from work for justifiable medical or family-care reasons; block compulsory “light-duty” work programs; force employers to allow part-time schedules; obtain attendance bonuses for workers absent for medical reasons; and much more. An important tool for every union rep.)