Nine days left to pass Prop. 15 and reclaim $12 billion for our schools and our communities. 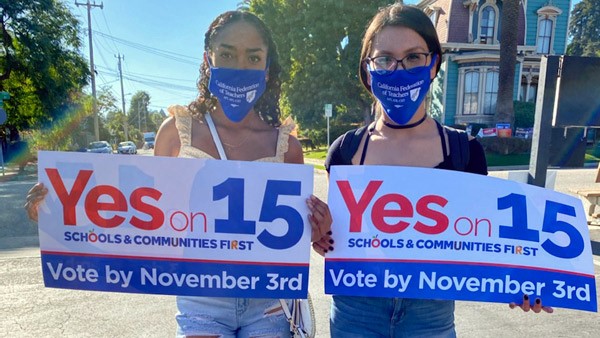 With just nine days until November 3, our campaign to pass Prop. 15 and reclaim $12 billion a year for our schools and our communities is entering its final stage.

The latest public poll has Proposition 15 up 49% to 45%, but deep-pocketed corporate commercial property owners are spending big to scare voters. It will be up to all of us to do the work to get this critical measure over the finish line.

In this final stretch of the campaign your AFT Guild would like to emphasize the great importance of passing Proposition 15 on November 3rd.

The opposition has tens of millions more in dollars than we do–but we have YOU.

What can you do to help push Proposition 15 over the line and bring in $12-billion of revenue into the system annually?  Just a couple hours of your time will make a difference in the campaign.

* Please join one of the daily ‘Yes on 15’ phone banks run by the campaign and encourage your friends and family to Vote Yes on 15.

*Talk to ten of your friends and/or family members and tell them how much this revenue would allow us to emerge from the current crisis in better shaped and help the students we serve.

*Let you students know that there is a ballot proposition they can vote for that would help fund their college and avoid more budget cuts.  Here are some resources to help: https://www.cft.org/yes-prop-15

*Share the article below by Irwin Jacobs (founder of Qualcomm) and other Yes on 15 materials over your email lists and on Social media.

Opinion: Vote ‘Yes’ on Proposition 15 to Reinvest in California’s Future

By Irwin Jacobs | Special for CalMatters

I came to California with a dream of finding opportunity and building a future — a dream that was made possible by public investments in the public good.

It was 1966 and my wife and I arrived with our young family in San Diego. It was an exciting time. California was investing in people, schools and infrastructure — and the future was bright.

California was building universities, community colleges and expanding K-12 schools to train the next generation. While my four children attended local public schools, I taught at the new public University of California, San Diego, in the electrical engineering department.

These public investments made California a place where everyone could achieve their full potential. It became the place where my family thrived, my innovations took shape, and my colleagues and I were able to start a small business called Qualcomm that has become a leader in the telecommunications industry, changing the way we connect around the world. 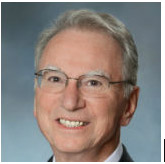 Unfortunately, the public institutions that nurtured me and my generation are now struggling from the chronic disinvestment caused by a property tax loophole that a small number of large corporations use to avoid paying their fair share. This November, we have a chance to close that loophole by passing Proposition 15, which will reclaim $12 billion a year for schools and communities so that we can again reinvest in our future.

The loophole was created in 1978 as part of a ballot measure to protect aging homeowners by freezing their property taxes until the property was sold to a new owner. Unbeknownst to many voters, Proposition 13 also froze property taxes for commercial and industrial properties.

As a result, some of the oldest commercial properties in the state, like Disneyland, pay 1978 property taxes while charging 2020 ticket prices, pocketing billions in profits and depleting the surrounding schools and communities of critical resources. This is also true of private country clubs, oil refineries, railroads and other large properties that are not paying taxes on the market values of their properties, while the public institutions around them crumble.

Prop. 15 will help correct this problem by requiring large commercial and industrial properties valued above $3 million to be regularly reassessed and pay taxes on the fair-market value of their properties, rather than the original sales price. What does this mean for Qualcomm, the company I co-founded? It probably means that the older properties they own will pay more in taxes to reflect market-rate property values. It also means that the newer properties they own that are already paying taxes on market values will pay the same.

Qualcomm is the second largest property taxpayer in the region, contributing more than $23 million to support the local schools, community colleges and essential services that help everyone get ahead. Qualcomm has always recognized its role as part of the community, not separate from it. As the co-founder, I always believed that what we contribute to public institutions pays dividends in the form of a well-trained workforce, a liveable community and an inclusive economy that is built on shared opportunity and prosperity.

When we all pay our fair share, we all thrive. When big corporations don’t pay their fair share, the burden falls on families.

Prop. 15 is a reasonable and just reform whose time has come. Experts calculate that 92% of new revenue would come from just 10% of commercial and industrial properties. Their contribution will help resource public institutions that create opportunities for all of us.

This year I was blessed with two new granddaughters who I hope will flourish in a California that invests in all children, all families and all communities. We can help make that possible by restoring, expanding and funding the California Dream. Join me in voting “yes” on Prop. 15.

Irwin Jacobs is founding chairman and CEO Emeritus of San Diego-based Qualcomm. He wrote this for CalMatters, a public interest journalism venture committed to explaining how California’s Capitol works and why it matters.