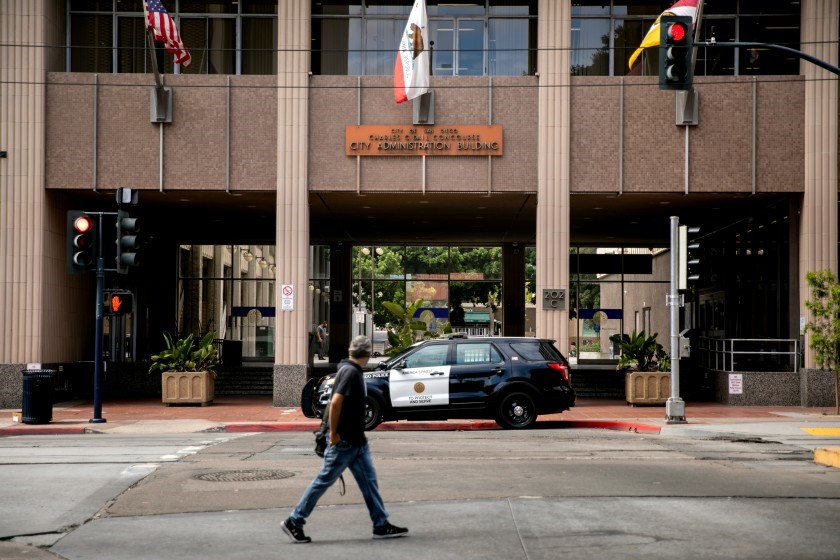 Netflix has a new category in honor of #BlackLivesMatter, and a few documentaries on the L.A. uprising are featured. It’s a corporate gesture similar to those made by the NFL and NASCAR, a symbolic response to protests that are actually disrupting the status quo. But gestures don’t result in real change unless activists push for more.

The “defund the police” campaign’s goal is to dismantle an inherently flawed, institutionally racist police state by rerouting funding toward public programs. Public programs in education, health care and housing provide structural care for communities. On the other hand, policing policies are forms of “structural violence” because they disproportionately harm and/or kill Black and Brown people. Activists want to end those structures that inflict violence and, in many ways, that is a revolutionary goal.

Cyclical uprisings against police brutality in the U.S. have a revolutionary impulse in common. Law enforcement officials are aware of that impulse and the strategies they use are based on one goal: crowd control. Next to getting re-elected, public officials have one related goal that we sometimes forget about because it’s their broadest one: to prevent revolution. Revolution is this country’s origin story and the Constitution is designed to prevent revolution by providing opportunities for the populace to affect political decision-making. But revolutionary change can happen in a multitude of places and ways, and, as I found in my research, especially if activists can establish roots inside the institution they want to end.

On Tuesday, San Diego City Council President Georgette Gómez introduced — and the council passed — a resolution declaring council support for a November ballot measure asking voters to create an oversight body called the Commission on Police Practices. It has broad support so far, including from the San Diego Police Officers Association, and would create an independent commission with investigators, staff and subpoena power — modeled after the city’s Ethics Commission — to review community complaints about police conduct and recommend reforms to the City Council and Police Department.

The commission could go in one of two very different directions based on how its members are appointed: either it could be another platform for a lot of talk and no action, or it could undermine the violent structural framework of policing.

The most impotent kinds of oversight bodies are temporary committees, even when members come straight from grassroots movements, because they have no power. Assuming that the commission remains permanent, there are five characteristics that would crack open the institution of policing to activists seeking transformative change.

2) Each member has a member-elect to mentor for longer term goals.

3) Each voting member is appointed by a different social movement organization, and those organizations revolve at regular intervals.

4) The committee has financial leverage, not just subpoena power, and can hold police funding if its recommendations are not followed.

5) The meetings are open, recorded and televised.

In my view, the third and fourth elements are the most important for giving this commission teeth and allowing it to actually influence structural change in policing. Many of the committees, councils, commissions, etc., that form in response to social movement mobilizing have a seat or two designated for “community members” or “public advocates.” But just because you have a seat at the power holders’ table doesn’t mean they’ll listen to you, much less take action. Financial leverage would provide an important form of structural power to the commission, but activists, not politicians or administrators, need a place at the table to wield that structural power.

There is no doubt that #BlackLivesMatter is already changing society. We are finally being forced to acknowledge and address the ways that White privilege and anti-Black racism are baked into the structural cake of U.S. institutions, including criminal “justice.” Using reform to incrementally end those structures is a slippery and misunderstood slope towards being co-opted by the state. It can’t just be any reform, it has to be the right reform.

Revolutionary change in the U.S. is a marathon and we should all feel indebted to #BlackLivesMatter activists who are grieving, healing, fighting and inspiring us all to fight against structural violence.

Evans is an assistant professor of sociology at San Diego Mesa College who lives in North Park.  Erin Evans <eevans@sdccd.edu>