“Hate is rising in the United States with a zeal, emboldened by the White House, among others. It is a stain on our humanity, and good people must gather together to resist and repel it. Nearly six years after the death of Eric Garner, how many more black men will die at the hands of authorities after saying ‘I can’t breathe’? George Floyd had a right to live. The haunting question we must ask is: If Floyd had been white, would that police officer have continued to put his knee on Floyd’s neck after hearing him say he couldn’t breathe? Black families deserve to raise their children in a world that does not traffic in this gross inhumanity, and that does not also force them to bear the burden of confronting it. The fact this is not self-evident is, in itself, a moral failing of America.

“If you were jogging like Ahmaud Arbery, or sleeping like Breonna Taylor, or driving like Philando Castile, you were simply living as a black person in America—until you weren’t. Every black person in this country has a right to live, a right to breathe, and a right to be a part of their community without fear of violence and senseless attack simply for the color of their skin. Acts of hate like this are unfortunately not new, unique or disconnected. They represent a serious crisis in our society. This cannot be normalized. People of color in America are exhausted, and they’re terrified, and they have every right to be.

“The Minneapolis Police Department—like many police precincts across this country—must address the systemic stereotypes and profiling that make incidents like these all too common. We support the FBI in conducting a thorough investigation, and we implore the Justice Department to conduct a civil rights investigation into this murder. We pray not to have to mourn one more death like George Floyd’s, and we honor his memory.”

Education Minnesota also released a statement that condemns the death of George Floyd in the custody of Minneapolis police.

“This is a horrifying, senseless death that shows once again the racism that black, brown and indigenous Minnesotans live with every day,” Specht said. “We anticipate our students of color will experience trauma from this killing as they did with Philando Castile, Jamar Clark and too many other black men who died in police custody. Educators will once again do our best to help our students through, but this must stop. We grieve for the family of Mr. Floyd today, but tomorrow it will be time to join together and rewrite the rules so everyone, with no exceptions, can thrive without fear, care for their families, have their voices heard, and their rights respected.” 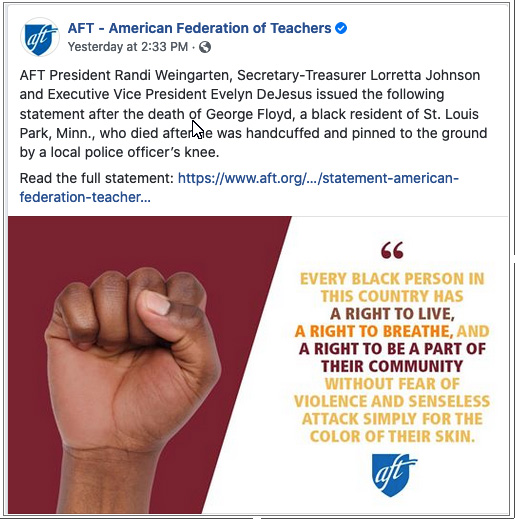