This week is the 50th anniversary of Earth Day!  The first Earth Day in 1970 was born after United States Senator Gaylord Nelson witnessed the horrible damage caused by a massive oil spill in Santa Barbara and was moved to try to harness the energy of the student movements of the sixties by creating what he called “a national teach-in” on the environment.  Consequently, on April 22nd of 1970, 20 million Americans took part in the first Earth Day with groups that had been separately fighting for clean air and water, wildlife protections, and a host of other environmental causes coming together to make a national statement.

In the wake of the first Earth Day, the United States saw the creation of the Environmental Protection Agency and the passage of the Clean Air and Water Acts as well as the Endangered Species Act.  Since that time, Earth Day has become an American institution even as we have seen the governmental agencies that the movement created fail to adequately address the growing climate crisis, and forces aligned with the fossil fuel industry deny science and push back hard-won environmental protections.

Hence the call to action that Earth Day was and is, has never been more urgent.  Indeed, the lack of preparedness by the federal government, the science denial, the inadequate response to the health and economic needs of everyday Americans, and the deep inequities that the present COVID-19 crisis exposed foreshadow what will be an even more catastrophic failure if we are unable to marshal the will and resources necessary to address the coming climate crisis.  We must do much better.

Thus, we encourage you to mark this 50th anniversary of Earth Day by noting its significance and/or bringing some aspect of environmental issues into your remote classes this week. Let your students know about San Diego’s virtual Earth Day event on Wednesday, April 22nd from 12-7 PM that features a talk and a panel by a group of college students including our very own AFT Guild student interns: https://climateuprisingsd.org.  Here is an Earth Day message from our AFT intern crew that you can share with your networks: https://www.tiktok.com/@aft_interns/video/6817598639565704454 along with the graphic below.

Your AFT Guild along with the California Federation of Teachers (CFT) has long been active in environmental movements locally and statewide in concert with our community allies.  For more on our climate justice agenda go here: https://aftguild.org/Categories/climate-justice and here: https://www.cft.org/climate-justice-campaign.

AFT Guild Professor Judd Curran of Grossmont College has recently completed a useful brief primer for educators interested in incorporating education about climate change into their classes that will soon be published by CFT’s Labor and Climate Justice Education Committee.  You can find that here: https://www.3cmediasolutions.org/files?i=17394&key=a80767b41bfaf5472b08a644afdd9d80f9daacb5

We hope you find these resources useful. 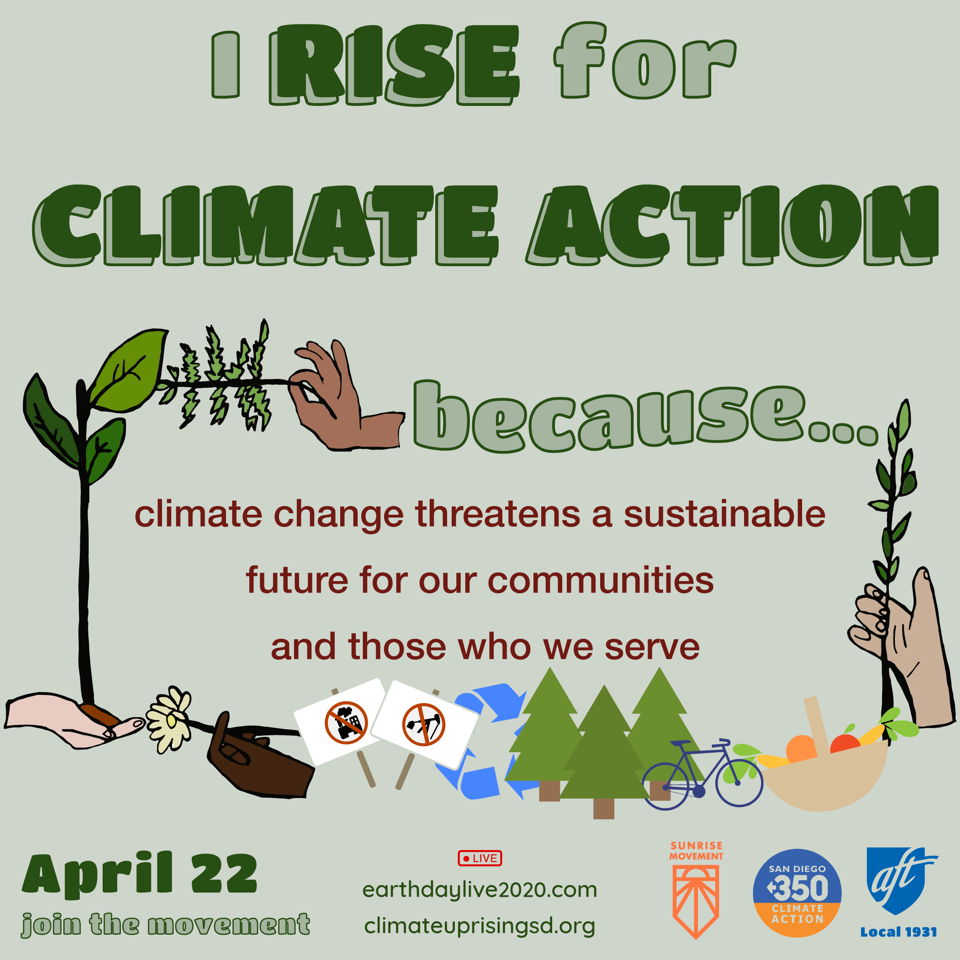