This Week in Labor History – September 25

This Week in Labor History
September 25
American photographer Lewis Hine born in Oshkosh, Wisc. – 1874
(Kids at Work: Lewis Hine and the Crusade Against Child Labor: Your heart will be broken by this exceptional book’s photographs of children

at backbreaking, often life-threatening work, and the accompanying commentary by author Russell Freedman. Photographer Lewis Hine–who himself died in poverty in 1940–did as much, and perhaps more, than any social critic in the early part of the 20th century to expose the abuse of children, as young as three and four, by American capitalism.)

Two African-American sharecroppers are killed during an ultimately unsuccessful cotton-pickers’ strike in Lee County, Ark.  By the time the strike had been suppressed, 15 African-Americans had died and another six had been imprisoned.  A white plantation manager was killed as well – 1891 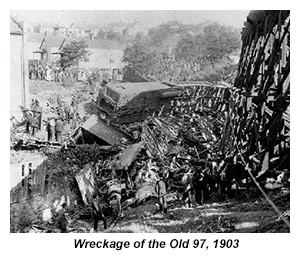 The Old 97, a Southern Railway train officially known as the Fast Mail, derails near Danville, Va., killing engineer Joseph “Steve” Broady and ten other railroad and postal workers.  Many believe Broady had been ordered to speed to make up for lost time.  The Wreck of the Old 97 inspired balladeers; a 1924 recording is sometimes cited as the first million-selling country music record – 1903

The first production Ford Model T leaves the Piquette Plant in Detroit, Mich. It was the first car ever manufactured on an assembly line, with interchangeable parts. The auto industry was to become a major U.S. employer, accounting for as many as one of every eight to 10 jobs in the country – 1908

The Int’l Typographical Union renews a strike against the Los Angeles Times; a boycott runs intermittently from 1896 to 1908. A local anti-Times committee in 1903 persuades William Randolph Hearst to start a rival paper, the Los Angeles Examiner. Although the ITU kept up the fight into the 1920s, the Times remained totally nonunion until 2009, when the GCIU—now the Graphic Communications Conference of the Teamsters—organized the pressroom – 1893 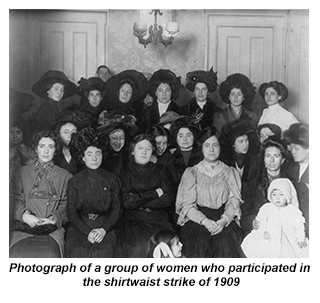 Int’l Ladies’ Garment Workers Union begins strike against Triangle Shirtwaist Co. This would become the “Uprising of the 20,000,” resulting in 339 of 352 struck firms—but not Triangle—signing agreements with the union. The Triangle fire that killed 146 would occur less than two years later – 1909

Twenty-nine west coast ports lock out 10,500 workers in response to what management says is a worker slowdown in the midst of negotiations on a new contract. The ports are closed for 10 days, reopen when President George W. Bush invokes the Taft-Hartley Act – 2002

The International Workingmen’s Association is founded in London.  It was an international organization trying to unite a variety of different left-wing, socialist, communist and anarchist political groups and unions. It functioned for about 12 years, growing to a membership declared to be eight million, before being disbanded at its Philadelphia conference in 1876, victim of infighting brought on by the wide variety of members’ philosophies – 1864 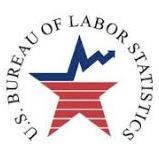 September 29
A report by the Labor Department’s Bureau of Labor Statistics finds that the average weekly take-home pay of a factory worker with three dependents is now $94.87 – 1962

September 30
A total of 29 strike leaders are charged with treason—plotting “to incite insurrection, rebellion & war against the Commonwealth of Pennsylvania”—for daring to strike the Carnegie Steel Co. in Homestead, Pa. Jurors refuse to convict them – 1892 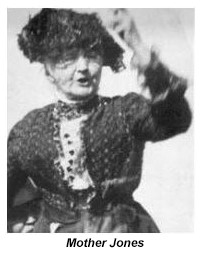 Seventy-year-old Mother Jones organizes the wives of striking miners in Arnot, Pa., to descend on the mine with brooms, mops and clanging pots and pans.  They frighten away the mules and their scab drivers.  The miners eventually won their strike – 1899

Railroad shopmen in 28 cities strike the Illinois Central Railroad and the Harriman lines for an 8-hour day, improved conditions and union recognition, but railroad officials obtain sweeping injunctions against them and rely on police and armed guards to protect strikebreakers – 1915

Black farmers meet in Elaine, Ark., to establish the Progressive Farmers and Householders Union to fight for better pay and higher cotton prices.  They are shot at by a group of Whites, and return the fire.  News of the confrontation spread and a riot ensued, leaving at least 100, perhaps several hundred, Blacks dead and 67 indicted for inciting violence – 1919

Cesar Chavez, with Dolores Huerta, co-founds the National Farm Workers Association, which later was to become the United Farm Workers of America – 1962

(Farmworker’s Friend: The story of Cesar Chavez: A thoughtful and moving book about the inspiring life of American hero Cesar Chavez, co-founder, along with Dolores Huerta, and long-time leader of the United Farm Workers of America. This sympathetic portrayal of Chavez and his life’s work begins with his childhood, starting from the time his family’s store in Arizona failed during the Great Depression and his entire family was forced into the fields to harvest vegetables for a few cents an hour.) 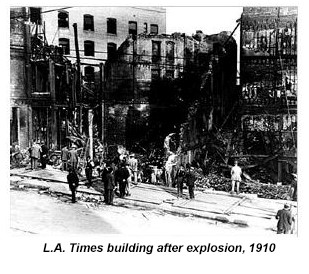 An ink storage room in the L.A. Times building is dynamited during a citywide fight over labor rights and organizing.  The explosion was relatively minor, but it set off a fire in the unsafe, difficult-to-evacuate building, ultimately killing 21.  A union member eventually confessed to the bombing, which he said was supposed to have occurred early in the morning when the building would have been largely unoccupied – 1910

The George Washington Bridge officially opens, spanning the Hudson River from New Jersey to New York. Thirteen workers died during the four-year construction project for what at the time was the longest main span in the world – 1931

Thousands of dairy farmers in Illinois, Wisconsin, Indiana and Iowa strike in demand of higher prices for their milk – 1935

The Pennsylvania Turnpike opened as the first toll superhighway in the United States.  It was built in most part by workers hired through the state’s Re-Employment offices – 1940

Some 200 Pressmen begin what is to become a two-year strike at the Washington Post. Nine of the paper’s ten other unions engaged in sympathy strikes for more than four months but ultimately returned to their jobs as the paper continued publishing. The press operators picketed for 19 months but eventually decertified the union – 1975