A core problem in discussions of racism IS the focus on individual attitudes rather than on structural inequities. 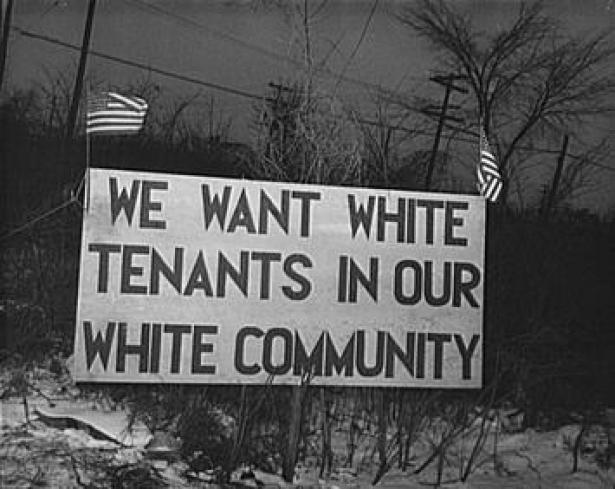 hat do you picture when someone refers to the “Trump’s base”? If you’ve watched television coverage of his rallies or read any of the dozens of articles in which reporters and commentators try to explain Trump’s appeal, then you probably imagine white people wearing “MAGA” hats and t-shirts chanting “Lock her up” or “send her back” in an arena in a mid-size Midwestern or Southern city. You might assume they include laid-off industrial workers, residents of declining cities or rural areas who view immigrants as a threat, people who spend their weekends at gun shows, and uninsured people who resent the “government intrusion” of the Affordable Care Act.

These are probably the people you picture when you read that polls show support for Trump increasing when he tweets what many consider racist jibes at women of color in the U.S. Congress or calls a black Representative’s district a “rat and rodent infested mess.” While you shake your head in frustration at these poor foolish dupes, you might also feel some empathy. It isn’t their fault they were “left behind” by the global economy or laid low by the exploitations of the opioid scandal. They just aren’t smart enough to see that they’re being manipulated.

As several recent articles have pointed out, this story is wrong. It ignores Trump’s real base  while reassuring the  educated urban middle class and elites that the problem with this country lies somewhere out there, among people who can easily be labelled as racist, xenophobic, homophobic, old-fashioned, and most important, working-class.

If you detect some exasperation here, you’re right. We’ve been making presentations and talking regularly with reporters and about working-class voters – by which they almost always mean white working-class voters – since 2007. We study class and race in Youngstown, Ohio, a racially-segregated deindustrialized community, so reporters called then to ask whether white industrial workers would vote for an African American or a woman. Now they’re asking why white working-class people would be drawn to Trump’s anti-immigrant, racist, and sexist bravado.

We could say plenty about the complicated relationship between racism and the working class, but we also know two things. First, although Trump does attract significant support from the working class, but his real base is the middle- and upper-class. Second, while his white working-class fans might respond with open approval to Trump’s racist appeals, his more educated, better-off real base embraces it, too.

In reality, the base for Trump, and the core of the Republican Party, is whiter, more rural, older, and more religiously conservative than Democrats. They are also richer. Democrats benefit from what some have called the “diploma divide,” winning more votes from people with college degrees, the most commonly-used basis for pollsters to talk about class, but Republicans take the lead – as Trump did in the 2016 vote – among those with incomes of $50K or more. It’s simply not true to Trump’s appeal comes primarily from economically-insecure voters.

The sad reality is that many voters don’t just tolerate the President’s nasty remarks because they appreciate his tax cut or his anti-abortion, pro-business Supreme Court nominees. Both racist attitudes and an investment in the racist policies that reinforce inequality in this country also appeal to many voters who, we’d like to think, ought to know better.

In part, Trump’s racism appeals because it violates the social rules that many white middle-class people resist. Since at least the 1990s, they’ve been hearing that they have to be careful what they say about women, people of color, and LGBTQ people, and that rankles. Some genuinely don’t get why it’s racist to call a black Congressman’s district “rat-infested” or to suggest that Representatives of color should go back to the troubled countries they supposedly came from. When critics call these statements racist, many white middle-class people hear a different message: it’s never acceptable for white people to criticize people of color. As Kevin M. Kruse suggested in a New York Times op-ed, Trump voices the resentment many white voters – of all classes — feel about not being able to say what they think. For many, Trump’s statements reassure them that they are not racist, they’re just not “PC.”

This points to a core problem in discussions of racism: the focus on individual attitudes rather than on structural inequities. To call someone racist is to judge their character. And most white middle-class people – like most human beings – think of themselves as good people. They don’t hate people of color because of their skin. That would be racist, and only bad people are racist.

What they tend not to understand – and what Trump’s tweets repeatedly distract us all from discussing – is that racism is structural. Hating people of color isn’t a prerequisite for investing in a system that provides most white people with better health care, better educations, more power in the workplace, higher incomes, and more opportunities to get ahead and secure a comfortable life. We can see this in several of the letters to the New York Times after it ran a commentary arguing that white people’s rejection of school busing in the 1970s and 80s reflected their resistance to having their children go to school with black people. Several white parents wrote in to insist that they weren’t racist. They just wanted their children to attend a better school. Yet this ignores the likelihood that the school in the white neighborhood was better because of the higher incomes of white families and the higher property values in white neighborhoods, or because the children who attend that school deal with less day-to-day anxiety and disruption than those in more challenged neighborhoods.

Those economic conditions reflect racial disparities as well as government and business practices designed to reinforce those disparities. Did white parents create those economic conditions? Not directly, though they probably elected the politicians who implement the policies and may well have had an economic interest in the businesses that also contributed. Did they and their families benefit from those policies? No doubt.

The racial resentment we see today is rooted in the idea of meritocracy. In the land of opportunity, no one wants to believe that their success might stem from any unfair advantage. This is another reason why Trump’s racism appeals to white middle-class voters: they believe in meritocracy.  If the system is fair, as they believe it is, then whatever getting ahead they eked out reflects their intelligence, abilities, and hard work, not a system that is rigged or unequal. They may well see Barack Obama’s two terms as President as proof that meritocracy works. If America elected a black man, isn’t that proof that racism doesn’t hold back those who deserve to rise? And it that’s true, then why should we believe that racism is what keeps others down?

They either don’t know or don’t believe what a 2018 report from the Economic Policy Institute shows: that African Americans continue to lag far behind whites in every economic category, from education to income to home ownership, unemployment, and incarceration despite their rising education rates and incomes. Perhaps they base their vision of the black experience in America on what they see on TV, which today offers more and more positive images of people of color, especially African Americans, than a few decades ago. In recent years, in part because of Black Lives Matter, the rise of white supremacist activism, and anti-immigration efforts, racism and racial inequality have become center stage issues in American politics. That all of this has occurred while the white middle-class have seen their wages stagnate, their jobs become less secure, and their children struggle to achieve the trappings of middle-class life all contributes to resentment.

That may explain why instead of blaming corporations or Wall Street for not raising wages or for cutting jobs, many white middle-class voters hold on to the belief that good business principles require companies to make those choices. They worry over how to pay for their children’s or grandchildren’s college tuition but don’t question Republican policies of cutting state funding for education. They worry about their children’s futures, wondering if they will ever find good jobs or afford to buy homes of their own. Yet they hold on to the hope that they or their children will someday be in a position to reap the benefits of conservative policies for themselves.

To be fair, Democrats also make choices that shore up their economic and racial privilege, though might be somewhat more likely to wrestle with their choices or to acknowledge the inequities they are supporting. Republicans seem more likely to see hope in policies that support corporations or in cutting taxes, while Democrats may believe that everyone will do better if our society ensures more opportunities for those without their advantages.

The geographic divide also contributes to these perceptions. It isn’t just that Trump’s supporters are more likely than other voters to live in racially segregated Rust Belt cities or mostly white rural areas, it’s also that in those regions, white middle-class voters are less likely to recognize how people of color contribute to the economy. In coastal cities, many of the progressive white elites rely on immigrants and workers of color to do the lower-paid jobs that make their lives easier. They work as nannies, home healthcare workers, landscapers, janitors, bus drivers, and food service workers, and their relatively low wages make these services affordable for the white middle class in high-cost urban areas.

While benefiting from the low-cost services that working-class people of color provide, many middle-class homeowners don’t want them living nearby, so they support exclusionary zoning laws that bar low-income housing in their neighborhoods. Some localities have pushed back, passing local ordinances that emphasize more inclusionary zoning, but at least, eleven legislatures have in turn passed state-level rules that block such rules. This fall, the US Supreme Court will take up the legality of inclusionary zoning ordinances — one of several cases focused discrimination that the Trump-stacked court will decide this year and the one that most clearly addresses structural racism.

All of this suggests that instead of just castigating Trump as a racist individual, Democrats should put more focus on the injustice built into the system. That means advocating for policies that help increase opportunity for everyone and reduce structural inequities. But it also means that instead of just responding to Trump’s racist tweets, candidates should use those comments as opportunities to talk about the injustice of Republican policies.

Sherry Linkon is an English professor and director of Georgetown University’s writing program. Her most recent book is The Half-Life of Deindustrialization: Working-Class Writing about Economic Restructuring (University of Michigan Press in 2018.).

John Russo is a retired Labor Studies professor and visiting scholar at Georgetown’s Kalmonovitz Initiative for Labor and Working Poor.

They are are the founders of the Center for Working-Class Studies at Youngstown State and the the blog, Working-Class Perspectives.