WHEREAS, free speech and freedom of association are among the fundamental tenets of our democratic republic; AND

WHEREAS, in the past 100 years, we have evolved our legal interpretations to recognize that it is vital to our democracy to allow free speech for all, even those with whom we vehemently disagree; AND

WHEREAS, in 1912, workers of all walks of life, led by the I.W.W., Local 13, gathered in San Diego streets to protest and speak out against economic injustice and joined the national struggle to affirm the rights of all under the United States Constitution; AND

WHEREAS, in that same year, the San Diego City Council passed Ordinance No. 4623 banning any type of free speech or assembly in a 49-block radius of downtown San Diego; AND

WHEREAS, this ordinance read, in part: "It shall be unlawful for any person to address any assemblage, meeting or gathering of persons or hold or conduct any public meeting or make or deliver any public speech, lecture or discourse or sing any song or songs or take part in any public debate or discussion in or upon any public street or alley within that certain district in the City of San Diego…" AND

WHEREAS, this ordinance suppressed the free speech of all citizens of San Diego; AND

WHEREAS, the downtown Stingaree district was the heart of the working class in San Diego who had the most to learn about the economic injustice of the day but were denied the opportunity to benefit from robust public discussion on the issues affecting them, for fear of imprisonment and monetary fines; AND

WHEREAS, those affected, and others who were appalled by these free speech restrictions, stood up to police and fought for their right to protest; they were subsequently abused and held in local jails—some without trial for a period of up to six months; AND

WHEREAS, the City of San Diego and Chief of Police turned a blind eye to the violence perpetrated by police and vigilantes, allowing vigilantes to brutally tar and feather nationally known activist and "physician to the poor," Dr. Ben Reitman, and forcing him and his companion, Emma Goldman, out of San Diego; AND

WHEREAS, individuals such as George Marston, an important San Diego business leader and father to Helen Marston, who would later go on to found the local American Civil Liberties Union, refused to sign the petition to have speakers driven off the streets and instead publicly advocated for the free speech of all; NOW, THEREFORE

BE IT PROCLAIMED, by the Council of the City of San Diego, that this Council, for and on behalf of the people of San Diego, on this 100th anniversary of the historic San Diego Free Speech Fight, does express its deep dismay for our predecessors' actions and formally reiterates the Council's repudiation of this shameful ordinance. 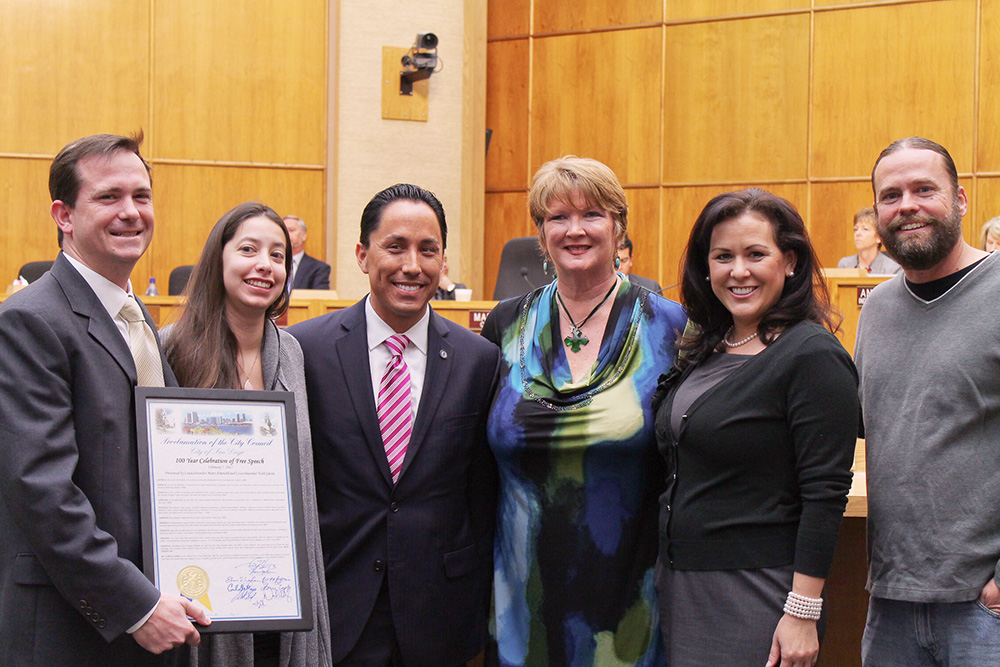